In the metallurgical industry, the rotating mechanism has a wide range of applications, ranging from bearings and roller tables to reducer shafts and rolling mill shafts, all relying on rotating motion to bear or transmit loads.With the rapid development of industrial technology, the speed and load of rotating parts are also increasing, and their manufacturing standards are becoming increasingly stringent.Due to parts manufacturing errors, assembly errors and other reasons, the rotating mechanism will inevitably be unbalanced, which will cause vibration, noise and heat during testing or actual operation.

When the unbalance is too large and exceeds the reasonable range, it will cause abnormal equipment vibration and temperature rise, aggravate the wear of the bearing, and shorten the service life of the equipment.A large number of statistical data show that the proportion of rotating machinery failures due to excessive imbalance is up to 75%.Especially for iron and steel enterprises, under the trend of high-speed equipment, complicated working conditions, and continuous process, the failure of the rotating mechanism will not only cause huge economic losses, but even lead to personal injury accidents.Therefore, it is of great practical significance to reduce the remaining unbalance of the rotating mechanism and ensure its smooth operation.This article takes the high-speed shaft dynamic balance test in the manufacturing process of the bar rolling mill reducer as an example, and discusses several easy-to-occur errors and precautions.

The working speed of the high-speed shaft of the bar rolling mill reducer is far lower than its first-order critical speed, and it can be adjusted on one or two arbitrarily selected correction planes at any speed lower than the working speed of the rotor, and the correction After that, at the highest working speed and any speed lower than the working speed and close to the actual working conditions, the unbalance amount does not significantly exceed the specified balance requirements. Therefore, the high-speed shaft of this type of reducer is usually The system is regarded as a rigid rotor. According to the correction surface of the rigid rotor dynamic balance, only one or two general dynamic balance methods are needed, including two-point method, three-point method, applied mass shift method, influence coefficient method, etc. The influence coefficient method is A dynamic balance correction method widely used in the reducer manufacturing industry. It generally requires two correction planes, that is, the unbalance of the rotor is simplified to two correction planes. The vibration response of the vibration system is caused by the unbalance of each correction plane. The vibration response of the linear superposition, and the vibration response caused by the unit imbalance on each correction plane is called the influence coefficient (Figure 1). 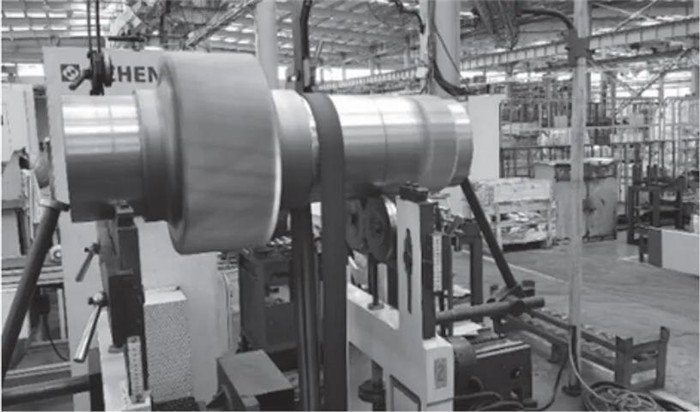 The allowable residual unbalance of the rotor is based on the overall size, weight and actual working speed of the rotor.In the design of rolling mill reducers, the balance quality level G usually takes a value of 6.3.When calculating the allowable residual unbalance of the shaft system, the mass, dynamic balance level and maximum working speed of the rotor should be brought into formula (1) for calculation.

According to the selected balance level G, the allowable residual unbalance amount U can be obtained by formula (1)to

Where Uto Is the value of the allowable residual unbalance, in grams and millimeters (g·mm); (eto×Ω) is the value of the selected balance quality level, in millimeters per second (mm/s); m is the mass of the rotor, in kilograms (kg); Ω is the angular velocity of the working speed, in radians per second (rad /s), where Ω ≈ n/10, and the unit of working speed n is revolutions per minute (r/min).In the actual test, many reducer manufacturers are limited by the maximum speed of the balancing machine, and the test speed during the dynamic balance test of the shaft system is lower than the actual working speed.For the shaft system that can be regarded as a rigid rotor, the test results obtained at different speeds are not much different, therefore, more accurate results can be obtained by testing below the working speed.However, when calculating the allowable residual unbalance that is used to determine whether the rotor dynamic balance meets the design requirements, the test speed cannot be included in the calculation, that is, the angular speed Ω (or speed n) in the formula (1) must be the shaft system of the reducer The maximum working speed, otherwise, the obtained allowable value will have a serious deviation, and the unqualified dynamic balance shaft system will be judged as qualified outflow.In addition, in the above calculation, it is more reasonable to use the highest working speed for the angular speed Ω or speed n, and bringing in the design maximum speed will make the allowable value Uto Too harsh and increase manufacturing costs.

In the double-sided dynamic balance test, the rotor rotates at the test speed on the two supporting surfaces of the balancing machine, and the actual remaining imbalance of the shaft system is finally obtained.If the actual value is less than the allowable value, it is qualified and no dynamic balance correction is required. Otherwise, it is corrected by weight removal or weight gain.It should be noted that Uto It is defined as the total tolerance in the centroid plane. For all double-sided balanced workpieces, the total tolerance should be allocated to each tolerance plane. The calculation method is as follows:

5 The problem of unbalance correction 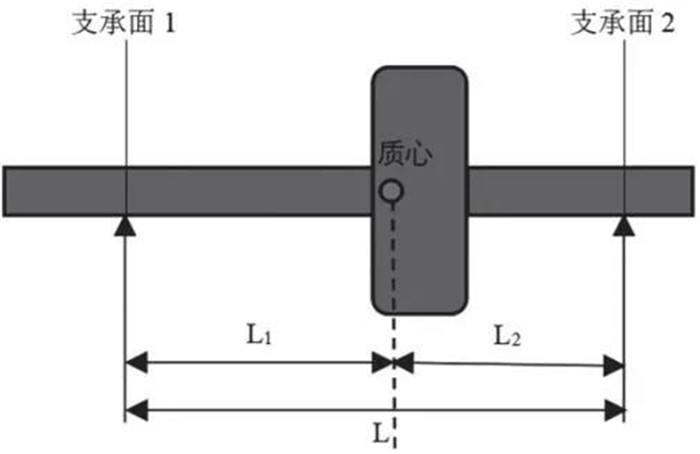 In the double-sided dynamic balance test, there are two supporting surfaces (as shown in Figure 2), and there should be two corresponding correction surfaces to ensure that the actual residual imbalance of the two surfaces after weight removal or increase of counterweight is less than their respective allowable amounts. Use value.Most balancing machines can manually input the allowable remaining amount of each calibration surface and set the calibration method before the test. After the test is completed, the balancer will calculate the actual remaining unbalanced mass and the corresponding position in the calibration plane. The operator needs to compare the results with this Compare the allowable values ​​to determine which plane needs to be corrected, and perform weight removal or weight gain according to the specific correction method given by the balancing machine, as shown in Figure 3. 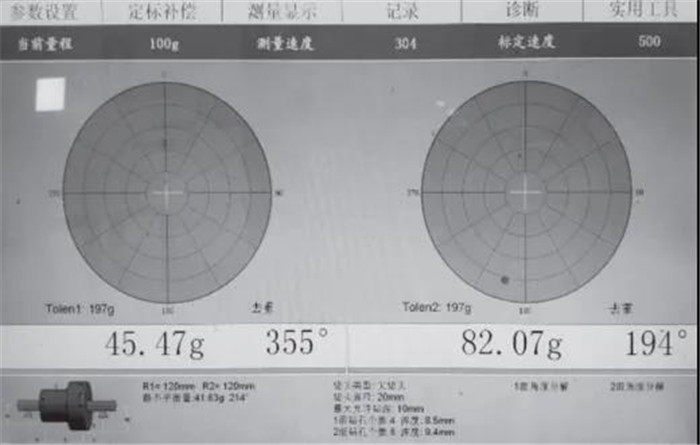 (1) For the bar mill reducer, the working speed of the high-speed shaft is much lower than its first-order critical speed, but it is a rigid rotor, which is corrected by the influence coefficient method.

(2) The single-sided or double-sided dynamic balance should be determined according to the speed of the shaft system and its width-to-diameter ratio.

(4) In the double-sided dynamic balance test, the allowable residual unbalance shall be allocated to the two tolerance planes, and the corresponding allowable value of each plane shall be obtained as the criterion for judging whether it is qualified or not, and the unqualified shall be carried out according to the results. Correction.